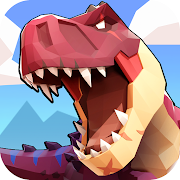 Summon Ticket x10 + Gold x10,000 immediately provided for freeOne dinosaur obtainment guaranteed!Chaaarge! Meet the most dangerous animals and warriors in the primitive world! One of the large-scaled strategy war multiplayer games is here! Enjoy adventure time on your phone and build a legion of primitive clans and dinosaurs! Use your art of warfare and become the strongest in the battle royale set in primitive times! ■ The rule is simple, but the scale of war is big.- It is so easy that anyone can play this multiplayer game, but this is nothing like the other strategy games!- You want a war? Create your dino squad with primitive heroes and dinosaurs. – Merge your heroes and become stronger! It is a war game that fighting with the best attack formation and placement mean a lot!- Think more