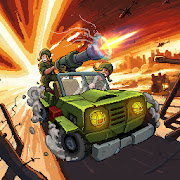 Back to your childhood with the legendary jackal jeep game 1988 . Jackal Squad – Top gunner – Arcade shooting is an overhead run’n gun-style shoot-’em-up video game that can bring a classic vibe to your phone.World War II broke out, the Fascists attacked the Allies. Your brothers in arms are hostages behind enemy lines. The Jackal squad has been given a mission to drive an armed jeep into hostile territory in order to rescue and extract prisoners of war. As a soldier of an elite group that has undergone a harsh training regiment to survive in any environment, can you complete this mission and put an end to the war? HOW TO PLAY Touch the screen and drag in the corresponding direction to move your pixel jeep. Attack enemy’s territory within your jeep weapon’s radius. If there are many target